From console to PC gaming

Looking to take your gaming to the next level? We’re here to help you make the shift.

Moving from console to PC? Welcome to a whole new world of gaming. Don’t get us wrong: consoles are fantastic, but no other machine gives you the same graphics performance, flexibility and choice as a powerful gaming PC. It’s long been the platform for cutting-edge games, serious sims, strategy games and RPGs, while there are good reasons why the world’s leading eSports champions gravitate to the PC. If you’re making the move to a mighty gaming rig, we’re here to guide you through it.

Get used to having too much choice

The first and biggest thing to get used to is the sheer amount of choice. Simply buying a gaming PC involves working through a range of different components and specifications. With console gaming everything is simple; developers build games for a limited range of console specs, and have a duty to optimise the games to run as smoothly as possible on them. On the PC, they’re dealing with thousands of different configurations, with wildly different CPUs, GPUs, RAM setups and storage devices. On PC, they should have to optimise, but it’s also up to you to make sure that your PC is fit to run the latest games – and find the best settings for running them.

Two things help here. Firstly, PC games tend to scale pretty well; you don’t need to max out every setting just to make your game look great. Even medium settings can look fantastic if you can’t afford the latest, greatest kit. Secondly, with all that choice, you can decide how much to spend and where you want to prioritise, in order to get the best results on the games you love to play. You can go for eye candy and prioritise detail settings and high resolutions, or take a hit there and tailor your spec to run your favourite eSports titles at high frame rates.

What’s more, if you do have the budget, you can go way beyond what the consoles can do. Turn up those graphics settings to High or Ultra. Enable ray tracing features that the consoles cannot handle. Push the resolution up to 4K or the frame rate beyond 120Hz. Use new technology like DLSS to run games at 4K resolutions without dropping below 60fps. Plus, there comes a point in every console generation where the PC leapfrogs Microsoft and Sony’s hardware to give you an early taste of what the next gen might hold.

Admittedly, it’s a little more difficult this console generation to replicate console performance on a budget. With fairly low-end components – a Core i5 12500 and an NVIDIA RTX 3050 Ti – you can easily beat the Xbox Series S for graphics detail, frame rates and resolutions, but you’ll need to hit the mid-range to beat the PlayStation 5 and Xbox Series X. Be realistic, and budget for a higher-end Core i5 or Core i7 and an RTX 3060 Ti GPU if you’re looking to get the same kind of experience.

If you’re focusing on eSports, you’ll have slightly different priorities – many of the world’s top players still play on 1080p monitors and don’t push their graphics settings up to max. That’s either because they’re playing MOBAs and strategy games where response times and visibility are more important than visual effects, or because they’re playing battle royale and competitive FPS games where situational awareness and frame rate are crucial. We’re not necessarily saying that you can get by with a lower spec, but that you might want to focus more on components that give you high frame rates at 1080p or 1440p than components designed around 4K/60fps performance.

Forget the telly – your gaming PC needs its own screen. You can spend more than £1,000 on a monster 4K HDR monitor with a 120Hz or 144Hz refresh rate, or around £150 on a 1080p/144Hz screen of more modest proportions. Again, it’s all about priorities. A smaller screen can make it easier to keep track of all the action in an FPS or battle royale game, while there’s no point in having a 4K screen if your PC is struggling to deliver high frame rates.

With a console, you have a standard controller. You might splash out on a steering wheel or an elite eSport controller, but most players are going to stick with the standard effort. With a PC, it’s different. Sure, you’re probably going to want an Xbox controller, or something similar, to play third-person action games, retro 2D hits and other console-style titles, but you’re also going to need a decent keyboard and mouse. Make sure there’s room in your budget. While there are some solid cheap peripherals out there, you probably need to spend around £40 to £100 to get a good gaming keyboard and a further £30 to £70 on your mouse (Alpha Beta PC has some great keyboard and mouse options to choose from). Add extra if you want to go wireless, and look for peripherals based on a gaming-grade 2.4GHz wireless connection rather than standard Bluetooth, especially if you’re planning to compete in eSports.

If you’re into sims or racing games, you’ll want specialist controllers. While a basic steering wheel or flight-sim joystick can be found for around £100, don’t be surprised if you end up spending more to get decent force feedback effects, pedals, gearsticks, throttles and more. It’s an addictive hobby and the sky’s the limit!

Finally, make sure you get a decent headset. While most PCs have built-in audio, the quality will depend on what’s been installed on the motherboard, which may be a specialist audio chip designed for gaming, or may be as bog standard as things come. As a result, it’s often more effective and convenient to use a USB gaming headset, which will often come with software support for virtual 5.1 surround sound and other useful features, or a wireless headset, which communicates with your PC through a USB dongle.

Again, budget for something good. Even in single player games, good audio can make a huge difference to the atmosphere. In competitive shooters, it can make the difference between life and death in battle, and victory or defeat for your team. 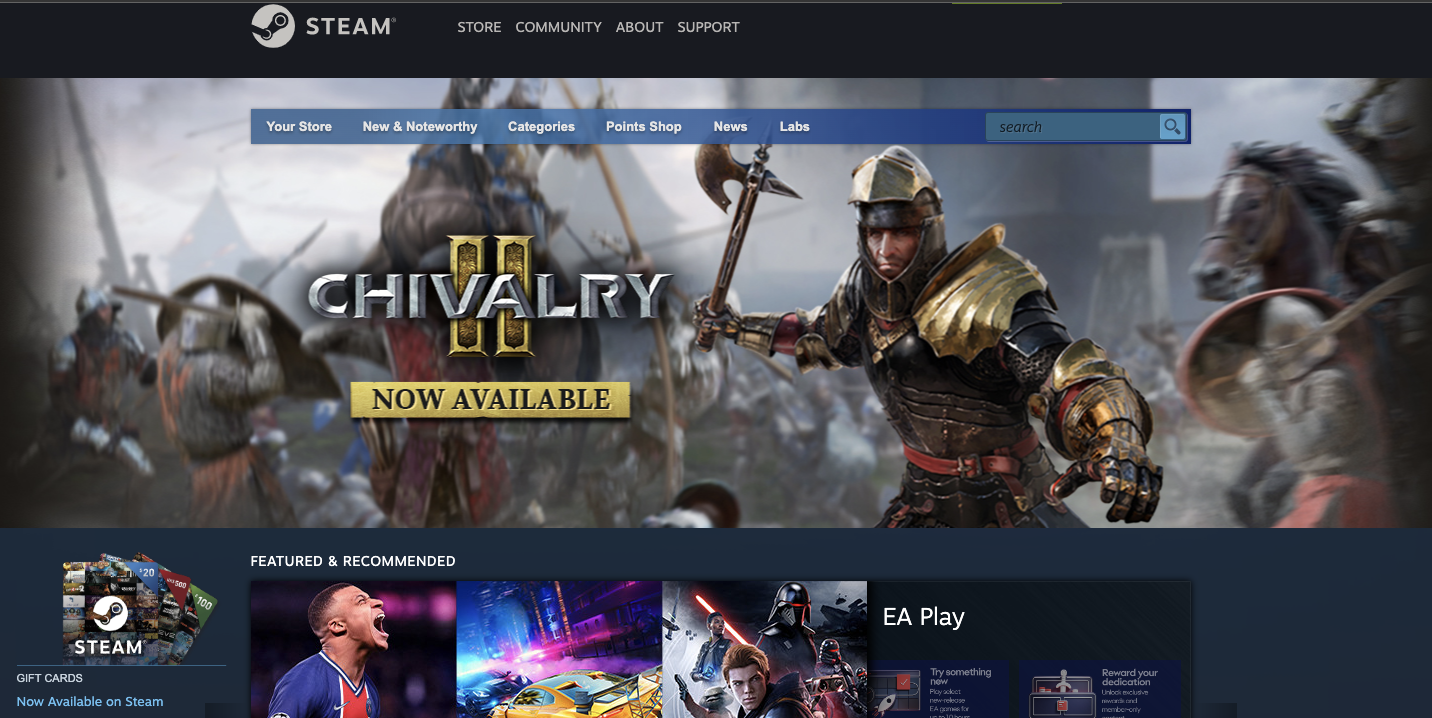 Moving to PC also means getting used to new ways to buy software. You can buy games online in physical form or digitally from the Windows built-in Store – and this can be the cheapest way to get them. However, it’s more likely that you’ll use Steam (by far the biggest gaming ecosystem on PC), the Epic Games Store, GOG.com, Green Man Gaming or Humble (the home of the charity-friendly monthly Humble Bundle). All these stores have impressive libraries and excellent sales where you can rack up a whole bunch of new and classic PC games on the cheap.

There’s no way to convert your existing console library to PC in its entirety, but some Xbox games bought through the Xbox games store will be Xbox Play Anywhere games. As long as your PC and your Xbox are both signed in to the same Microsoft account, you’ll be able to download these games and play them on your PC, with any progress carried over. You might also find that other games from Ubisoft and Activision will allow progress to carry over from the console version to the PC version, though you’ll have to buy the game again on your PC.

Some live service games, including Destiny 2 and Fortnite, allow the same form of cross-progression. Plus, most of the big online games now allow cross-play between console and PC, so while you might leave your console behind, you don’t have to do the same with your friends or your fireteam.

One downside of having so many stores to choose from is that you’ll have no single gaming identity on PC as you do on Xbox Live or the PlayStation network. Steam has a good profile and friends system, but you’ll probably need to have other accounts and friends lists with Battle.net, Epic, Ubisoft, Bungie, EA, Xbox and more. On the plus side, you won’t generally have to pay for these accounts. Outside of MMOs like World of Warcraft and Final Fantasy XIV, online gaming on PC is free – no need for Xbox Live or PlayStation Plus type subscriptions.

Finally, don’t forget that the biggest bargain in console gaming is also available on PC. Xbox Games Pass for PC gives you the same range of Microsoft exclusives, third-party blockbusters and indie games you’ll find on Xbox, but at a cheaper price. What’s more, it actually has a better line up of PC-friendly strategy games and RPGs. You can also sign-on to Ubisoft+ and EA Play to get Ubisoft and EA games through a monthly subscription, should you wish.

That might sound like a lot to get your head around but – trust us – it’s worth it. Once you’ve sampled the delights of PC gaming, you’re never going to want to go back!

If you’re looking to make the jump from console to PC, talk to one of Alpha Beta PC’s expert advisors and they’ll help you find the right PC for you.